This article is dedicated to David Trevelyan who passed away unexpectedly in July 2020. I had written this article back in May, inspired by my enlightening exchanges with David via WhatsApp. Back then, both David and I had felt that we would "save" this article for a time when COVID-19 wouldn't be uppermost in everyone's minds.

However, with David's passing and COVID-19's lingering presence, I have decided to release this article out to the world.

Rest in peace, our very special friend. Your love and wisdom have been a precious gift to us. We have been blessed beyond measure to have known you.

This article is Part 3 of our Kindred Souls Series (Part 1 and Part 2) that chronicles the relationship between Sebastien, my 24-year-old autistic son, and David Trevelyan, a passionate and talented digital artist and sculptor who had lived in Bali for the past three decades. For me, knowing David has further propelled me on a journey of understanding how Sebastien's intuitive creativity has been his source of survival...

That was what David, our artist mentor and Sebastien’s kindred soul, had texted to me in our WhatsApp exchanges on multiple occasions. For the longest time, I didn't get what he means. While the meanings of the individual words were clear, the essence of the sentence completely escaped me.

However, because it was related to Sebastien, I didn't give up thinking about it. The combination of words percolated in my unconscious for weeks on end. Until, one day, I got it.

Why is Sebastien art therapy? Simply because he intuitively seeks out the healing properties that art can offer, with every nerve and fibre of his being, without needing external guidance or tutelage. Like a tree that strains for sunlight and its roots that reach out to every source of water.

Other than his paintings and colourings, 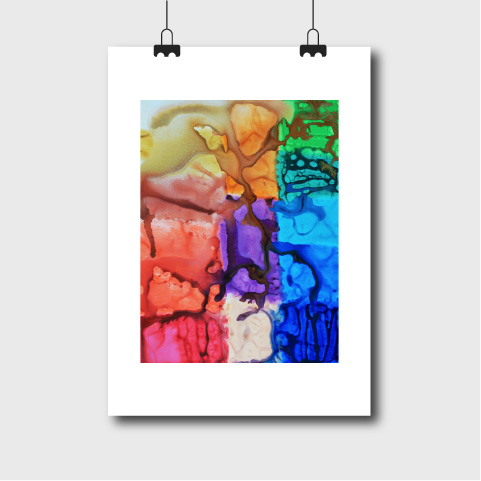 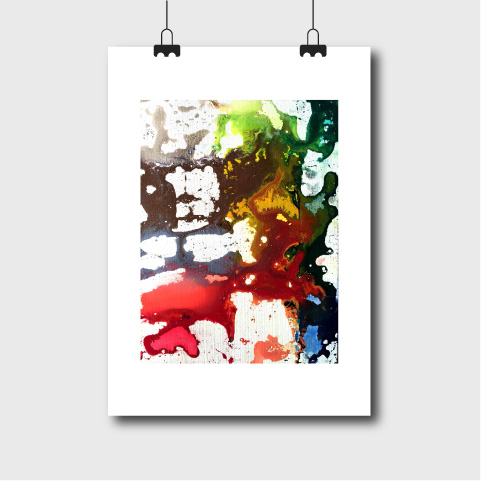 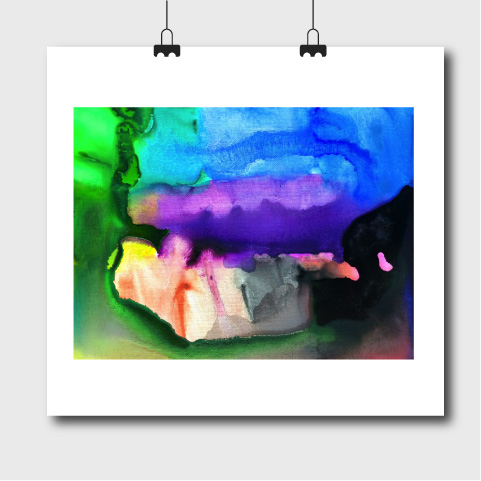 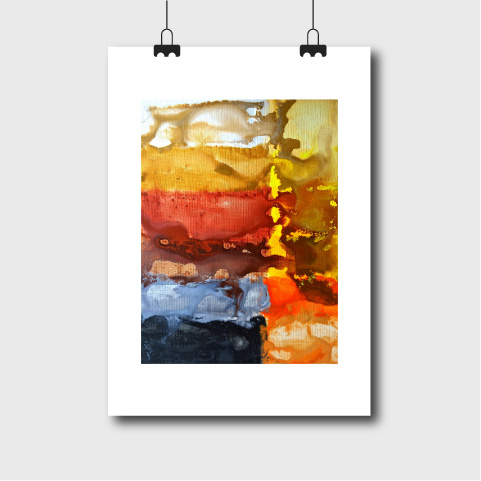 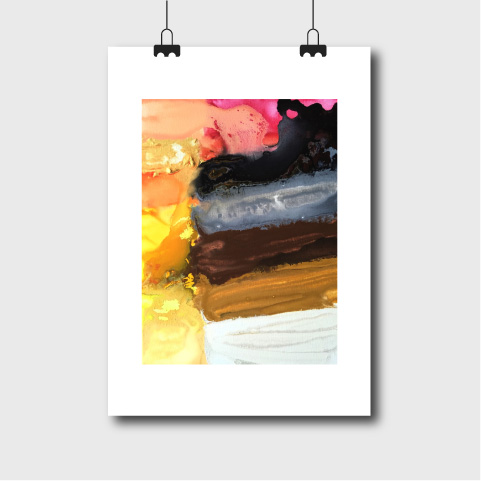 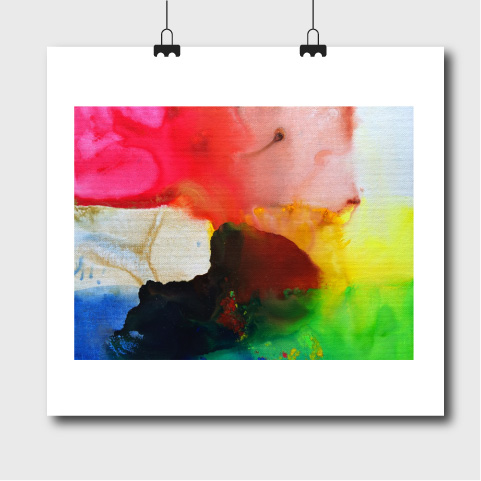 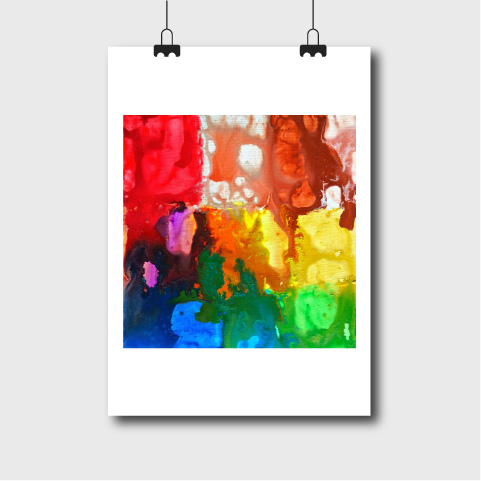 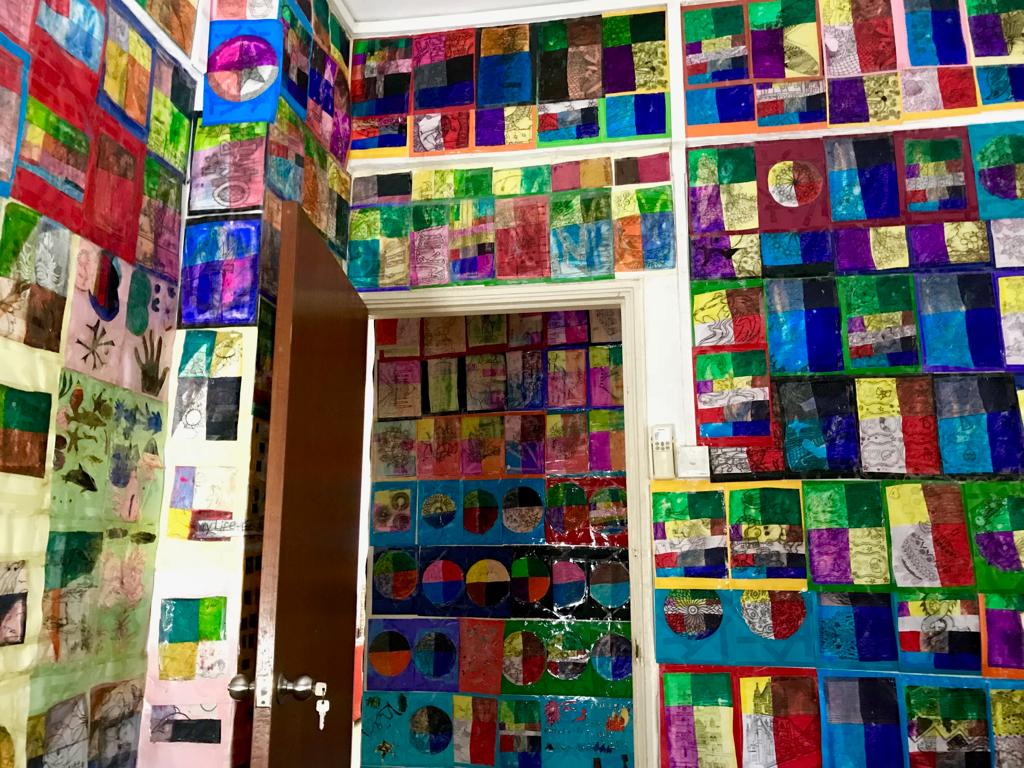 Sebastien’s natural tendency to innovate, left unchecked, can also be seen in his exaggerated handwriting, or the pictures he “copies” from books and naturally transforms into his own creation without any effort:

Once upon a time, I had admonished Sebastien for his unintelligible handwriting, or considered his transformation of these drawings as a "failure", an inability to draw. By allowing myself the luxury of relinquishing normative perspectives, I can now stand back and marvel at the magic of his creativity at work. Sebastien's creativity is special because it is pure, natural, and intrinsic. The fact that his art is entirely self-taught is what has led to the preservation of the purity of his artistic originality.

But more than just an artistic "preference", Sebastien’s artistic instinct is inextricably intertwined with his endeavour to survive in our world. To survive, Sebastien turns to creative expression as a source of healing for him. It is a sanctuary, a space where he can express his emotions and release his fears. Painting is what sustains him in his challenging marathon of life.

On a rare occasion, I had the opportunity to observe Sebastien painting and film him in action (see the video: https://bit.ly/3fv3zdt). Among the different things I witnessed, I was particularly intrigued by how Sebastien determined when he should stop painting. Several times, I had anticipated that he would stop: all the areas of the canvas had been "covered" and the painting had looked "ready". Yet Sebastien continued to apply more water and sweep his brush across the canvas, rubbing away the image with yet another. And then, just as inexplicably, he decided that he was done. None of it seemed to have been done with rhyme or reason.

It took me more than three years to discover that Sebastien's artistic process has nothing to do with an aesthetic evaluation of how the painting looks like. Rather, what solely matters is how he feels. He stops when he feels "well" enough to exit from his "painting sanctuary". The painting thus immortalizes Sebastien's well-being in that moment in time. Therefore, what makes Sebastien's artworks and artistry so precious is that it is an expression of his quest for well-being.

David was perfectly conscious of this. In order to protect and nurture Sebastien's creativity, we also need to pay attention to Sebastien. Not just Sebastien, the artist, but also the human being. For they are one and the same. When we first met and I had suggested that he served as Sebastien's teacher, he asked to visit Sebastien at his home. What has Sebastien's art got to do with where and how he lived? I couldn't understand at first.

With Sebastien's well-being uppermost in his mind, David needed to know how Sebastien was doing in life. Through his visit at Sebastien's home, David was able to affirm that Sebastien was "well". He was leading a wonderful life with loving carers and acknowledged us for having done right by Sebastien. It was a precious validation from someone coming from outside. At that point, we had only just settled into a comfortable place with Sebastien, after finally creating a nurturing and joyful existence for Sebastien, thanks principally to his carers, Bema and Hari. 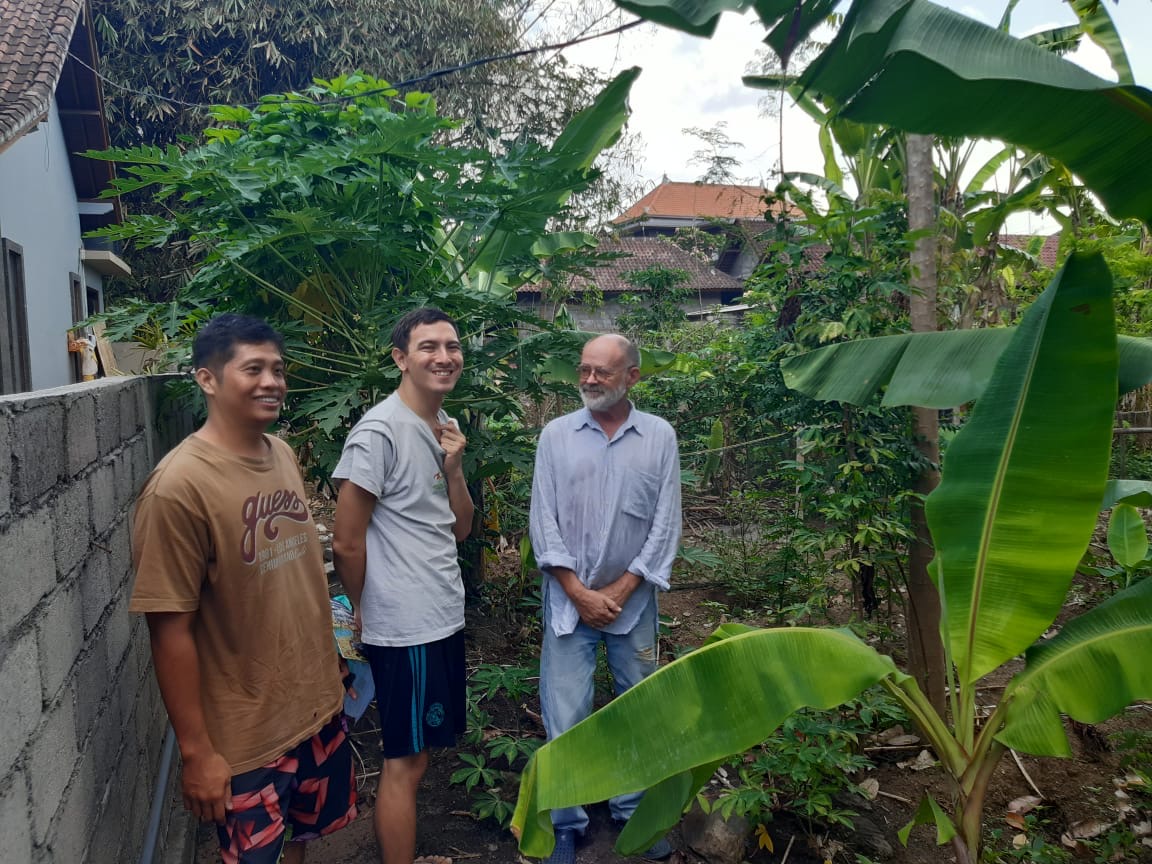 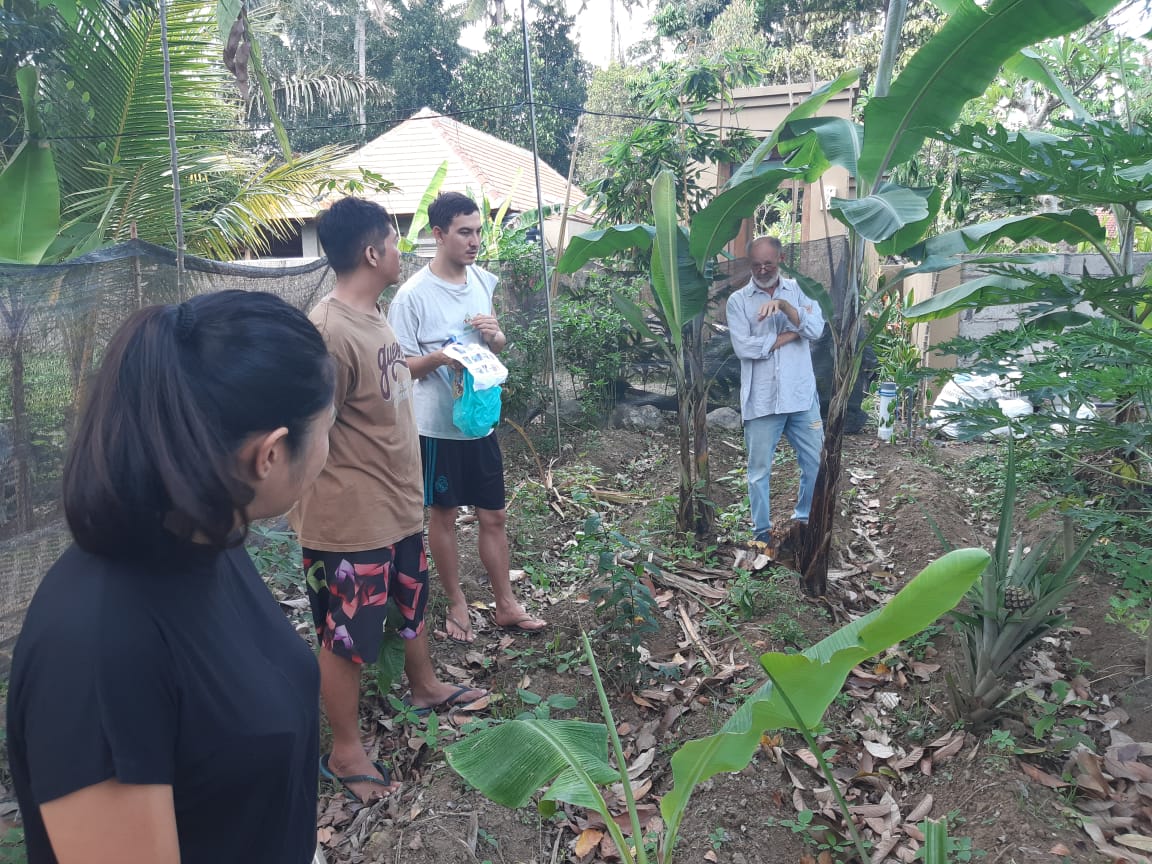 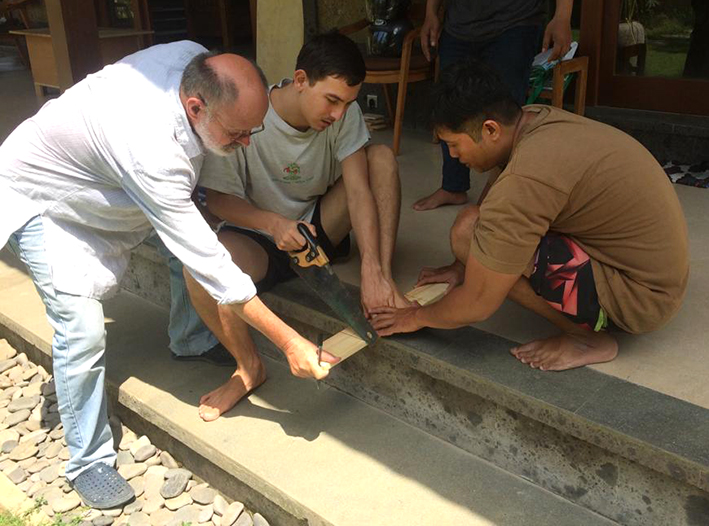 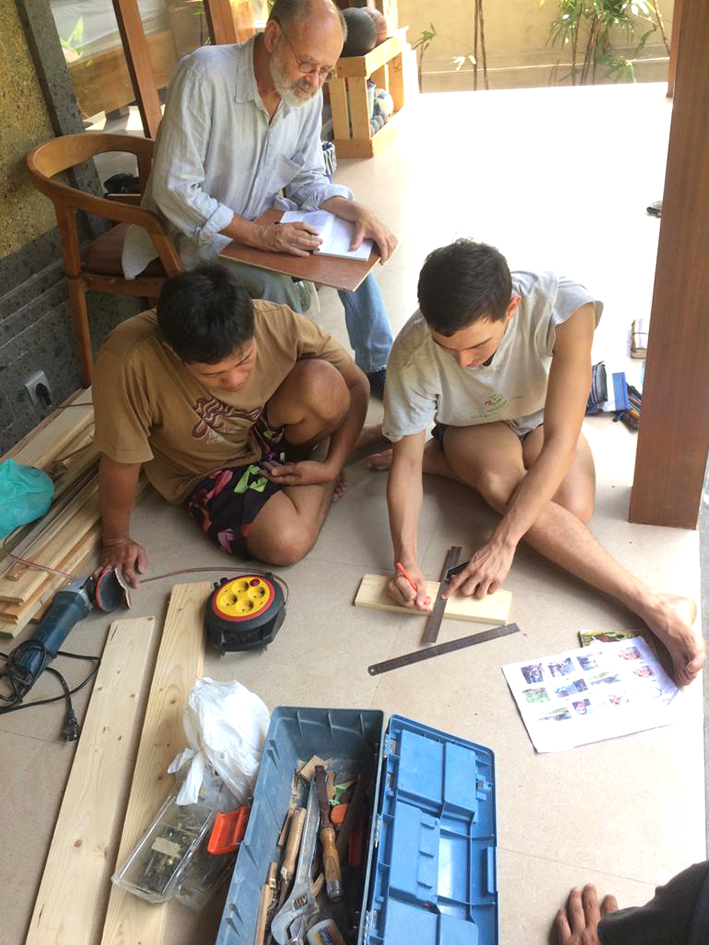 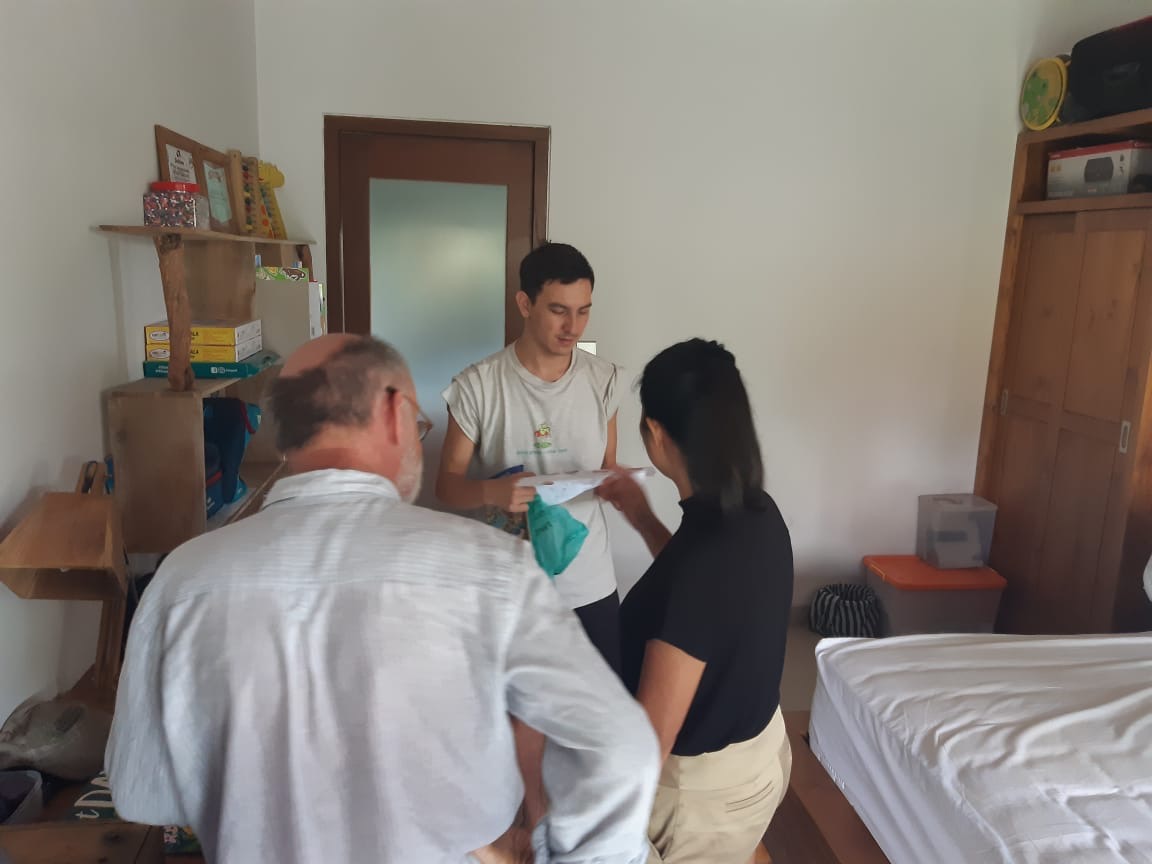 Therefore, our encounter with David and Rani seemed to have come at a perfect time. They displayed total sensitivity and respect for Sebastien, doing their best to know him, celebrating his talent, while paying attention to his emotional well-being, through our time together. In them, I have witnessed the best role models of people who truly seek to connect with autistic individuals and help them to thrive in our society.

In recent times, with our long separation, I sometimes reminisce nostalgically about how Sebastien would always resist outside pressures to move faster, push harder, or compete against others. For instance, he never wanted to walk when riding on the travelator; instead, he would perch on the belt and let the journey take its natural course. This would remind me of an old man sitting on a rocking chair on a porch, watching the world go by, without feeling the need to follow. Or how Sebastien seldom rose to the occasion during the mock races in skating classes. Despite being a natural-born skater who could pull off any of the instructor's drills with enviable ease, he was invariably the last to take off from the starting line. Our loud entreaties for him to go faster could only get him across the finishing line barely ahead of a five-year-old novice skater who was less than a third of his size. Sebastien didn't care.

At the time, I had attributed it to be his lack of cognitive capacity to grasp the concept of "competition" and "winning". But today, I can see how insecure we neurotypicals can be, with our constant need to "win" to prove that we are good enough. Sebastien didn't need to "win" to know that he was alright. Those races didn't matter. Being able to move to your own groove did. He was right.

Although it has been months since we have last been able to visit Sebastien in person, I take solace in the fact that his painting sanctuary has now expanded to become what I call the "Bali bubble". I am glad that it is protecting him from our mainstream life.

*"a therapeutic technique rooted in the idea that creative expression can foster healing and mental well-being."

Where Does My Autistic Son Belong (WDMASB)? A Crowdfunding Publishing Project

Snapshots of an Enlightened Society

Happy birthday to Sebastien, my autistic son, from afar

My Autistic Son's First 'Overnight' Trip with his Carers

On the Road with Sebastien, My Autistic Son

Mindful Movement for Connection Between Autistic Individual and Parent/Caregiver

A Respectful Visit… to the Home of Sebastien, My Autistic Son

My Autistic Son's Artistic Experience with a Kindred Soul

The Bali “Solution” for Sebastien, My Autistic Son: A 3-Year Reckoning